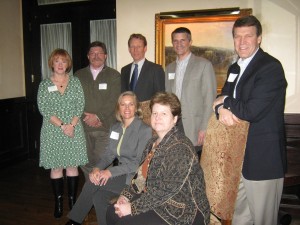 A few notes from Pacific Northwest Chapter of IMC event “Through the Eyes of the Executive Suite.”

The purpose of this event was to share experiences of being in an interim executive position within a company. The panel was made up of Bob King (COO), Tim O’Brien (CTO), Janis Machala (CEO), Marty Heimbigner (CFO), and was moderated by a good friend of mine, Barry Otterholt.

While plenty of stories and examples were shared, two topics came up predominately: Leadership and Success factors.

“I don’t believe leadership will change—it’s about knowing how to say no and how to execute change.”  Tim O’Brien

“It’s all about the people and the customers. Tactics will continue to change, but good leadership doesn’t and won’t.” Janis Machala

Some of the critical success factors they talked about are: positive focus, the ability to justify without confrontation, strong communication skills, ability to diagnosis a problem quickly, HONESTY—which is the missing element of success, ability to see the big picture quickly and execute at a detailed level, positive intent, nimbleness, and empathy.

I found their insights interesting and contradicting.

When the panelists were talking about interim roles becoming the norm they referenced the average tenure for the C-suite is about: 14-months for CTO, 18-months for CMO, 36-months for CEO, and 22-months for COO.

That conversation was followed with a discussion about the need to diagnose a problem and execute change quickly. I have to admit that I find this to be a contradiction if this is becoming the “new normal.” As interim executives, yes that is their role—to go in diagnose major problems and implement changes, then leave. But if businesses are moving toward that strategy, where senior management is changed up that frequently it is sure to send businesses spiraling downward, or at least apart. Maybe not right away, but long-term I am certain it will.

It takes an average new employee 6-12 months to learn a company and their job. As a “new” CXO, they are now expected to grasp the entire company—past, present and future, understand the details, implement new strategies and prove success basically in that same time period. Has the dot com bubble not taught us anything, still?

Not all problems can be fixed that quickly and most problems are nothing more than a cover-up of the real problem which is 2-10 onion layers deep which is only discovered once you start digging and usually just when you think the problem is about to be solved.

I completely agree that honesty is the missing element of success, and that it is vital for CXOs to be brutally honest, but if the new normal sets impossible demands the result will be an encouragement to produce results where they can have the most numeric impact, ignore the rest, and completely remove the personal element of business.
Under Executive Personal Branding
3 min read
Redfin is Changeing Buyer Expectations
Re-thinking New Year's Resolutions
Share Tweet Share